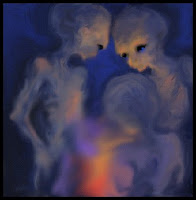 Read the following at your own risk. It contains a story that may not be for the weak hearted. Things are not always as they seem. Reality and fantasy can sometimes intersect, and when they do there can be consequences. Prepare yourself for...

Urgent update May 2nd, 2008
The webmaster of this site Has learned of the abduction of the BIG BRAIN by aliens. Apparently during the night he was taken by a group of aliens known as the Croniams. The BIG BRAIN has communicated this to yours truly via his massive brain waves. He is currently being probed by the Croniams in an effort to learn all of the Worlds knowledge. He is resisting at this time and is urging his followers to remain calm. I will ultimately prevail, he said. Stay tuned.

Urgent Update: May 4th, 2008
No further communication from the BIG BRAIN...webmaster worried.

Urgent Update: In an unprecedented coup, the BIG BRAIN has freed himself from the Croniams and escaped from their mothership. He is in an undisclosed location at this time and is working on ways to counteract their attack on this world. Stay tuned for further developments.

Update: May 15th, 2008
"BIG BRAIN SAVES WORLD" Early this morning, the BIG BRAIN focusing his massive brain waves destroyed the Croniam mothership and all its inhabitants. This intensive endeavor took its toll on the brain and he is in a severely weakened state. When asked about this heroic feat he just kept mumbling over and over "I’ll have fries with that." The BIG BRAIN is currently resting in a still undisclosed location. Stay tuned.....

May 17th, 2008 Update:
BRAIN recovering nicely but concerned about news of other Croniam scout craft moving into our solar system. The BIG BRAIN is currently working with government Officials to monitor the situation at this time...stay tuned.

The BIG BRAIN and Government Officials have confirmed the Croniams have surrounded the earth with a large number of scout craft. Brain feeling uneasy. He needs a sandwich.

Urgent Update May 28th, 2008
The BIG BRAIN has been contacted by a branch of the government he has not encountered before. They have left him with some disturbing information. The BRAIN is pondering the situation at this time and will get back with you as soon as possible. This may be more than the BRAIN can handle.......

Urgent Update: May 30th, 2008
The BIG BRAIN has been put in a difficult position. The survival of the world is in the balance. A moral delemia confronts the BRAIN. Good vs Evil sometimes has shades of gray. The BIG BRAIN needs to focus....stay tuned.

Urgent Update: June 4th, 2008
The Webmaster of this site has some disturbing information. The BIG BRAIN has not been heard from for days. Government Officials have been informed but seemed unconcerned. This is troubling. Hopefully I will have something to report soon.

Urgent Update: June 7th, 2008
Webmaster has good news. The BIG BRAIN is safe but has some unsettling information. The BRAIN has learned that the Croniams may not be our biggest problem. Apparently there is a darker side to this story. (There is a more menacing enemy) More info as allowed soon...

Urgent Update: June 14th, 2008
The BIG BRAIN has communicated the following. There is another group called "The Old Ones" that are the bigger enemy. At this point battling the Croniams will have to wait. I have never seen The BIG BRAIN this concerned. He is not even hungry. Webmaster is worried......

Update: June 20th, 2008
The BIG BRAIN is contemplating one of the biggest decisions he has ever had to make. There is a choice between good and evil and The BIG BRAIN has made his decision. The "OLD ONES" are offering power unseen beyond measure. The BIG BRAIN knows what he has to do. I have to go away for awhile.......but...I’ll be back.

Update: June 24th, 2008
The Webmaster of this site has turned to the only one left who may be a position to help. The BIG CAT has been consulted and has granted his assistance. Let’s all pray he will be able to do something. It is our only hope...stay tuned.

Update: June 28th, 2008
Great news, The BIG CAT using his giant feline Brain waves has learned The BIG BRAIN is alive. Apparently in a fierce battle with The "Old Ones" the BIG BRAIN was injured and is in a severe coma. More to follow but we just had to let you know.

Urgent Update: June 29th, 2008
The BIG BRAIN seems to be coming out of his coma but is still groggy. Apparently his battle with the "Old Ones" was intense and took its toll. He has requested a double bacon cheeseburger so things seem to be looking up. More later.

Update: July 5th, 2008
The BIG BRAIN has recovered enough to begin sharing some details about his ordeal. The "Old Ones" are evil, mysterious and pose a great danger to this world. There origins are unknown and The BIG BRAIN is still trying to fill in the gaps of the story. The are trying to gain control of this planet. A small but powerful agency of the Government has known about them for a long time but The BIG BRAIN is not sure of the intentions of this "Agency" The BIG BRAIN is pondering his options at this time. The survival of the world in in the balance. Can The BIG BRAIN prevail, only time will tell. Stay tuned.

Update: July 8th, 2008
The BIG BRAIN is learning more and more about The "Old Ones" and the news in not good. They have been here since before this current age. They are the essence of evil and are powerful beyond measure. The "Agency" and the "Old Ones" are one and the same and neither can be trusted. The BIG BRAIN has found allies within the government who can be trusted and they are preparing for battle. More later.....

Update: July 19th, 2008
The Webmaster of this site has learned The BIG BRAIN and his allies are engaging in a fierce battle with the "Old Ones" and the news is not good. The Big Brain has been weakened and is feeling a little light headed. Which, of course, is not good for any brain. I am fighting the good fight he said, but the "Old Ones" are a difficult menace. They may not be defeated, at least until the time of the end, he said. We shall see.

Update: July 27th, 2008
The BIG BRAIN, focusing his massive brain waves on the "Old Ones" is currently holding them at bay. He is not making much progress but is holding his own. This will be a long and difficult battle, he said, I may need more help.......... There is someone coming to help me. Here’s hoping I can hold on.....

Update: August 2nd, 2008
The "Old Ones" have disappeared. The BIG BRAIN received the help he was hoping for and the "Old Ones" have vanished. The BIG BRAIN is afraid they are not gone for good however. We have been given the gift of a brief moment in time where we have the chance to choose. Shall we follow good or shall we follow evil. We all must make the right decision. Let’s hope we all do. The End....for now.
Posted by Big Brain at 8:43 PM

Who is The BIG BRAIN

Big Brain
THE BIG BRAIN is an enigma, an oddity, and a freak of nature, but nevertheless “THE BIG BRAIN IS," and that’s all that really matters.